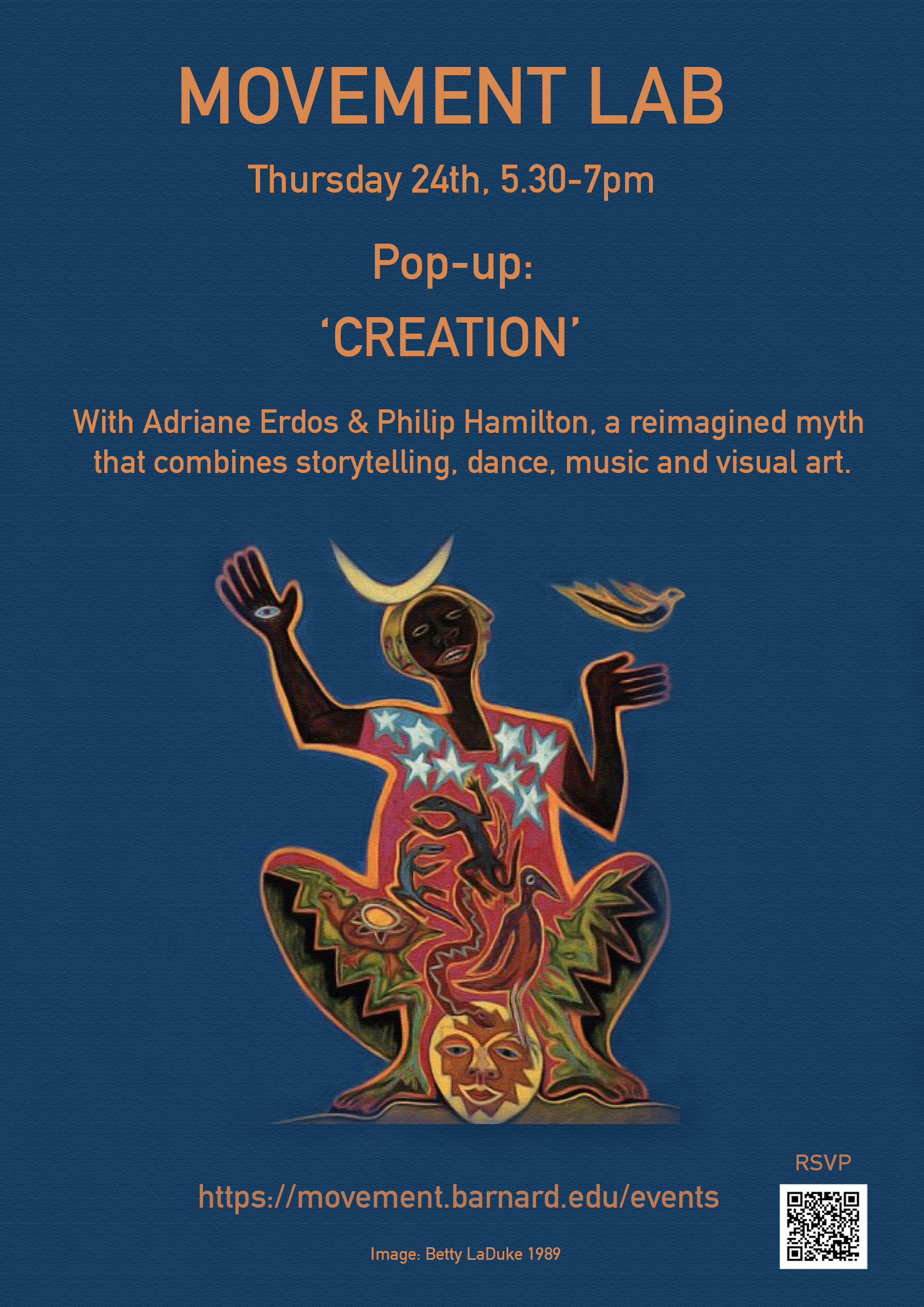 Come experience Creation! Creation is a reimagined myth that combines storytelling, dance, music and visual art.  This production, written and narrated by director  Adriene Erdos, is scheduled to premiere in 2023.

Erdos, a Barnard alum, along with collaborators, composer Philip Hamilton and visual designer, Corrado Verini, will present an excerpt from the production at the Movement Lab. This stop at The Lab will allow audiences to see the latest version of this visual tale in this unique production space.

Capacity in the lab is capped at 35 audience members. Attendees who have RSVP'd before the event will have priority, and admission will be determined on a first come first serve basis on arrival. If you RSVP before the event but you arrive late, we reserve the right to give your spot to someone on the waitlist.

Attendees who have not RSVP'd will be put on a standby waitlist if they arrive in-person before the event.

Adriane Erdos was mentored by legendary dance artist Anna Sokolow and at 19, she was the youngest choreographer to have her work accepted to Dance Theater Workshop’s “Fresh Tracks” series. While at Barnard, she took an interest in many world theater forms including Bharatanatyam (classical Indian dance) and was mentored by classical Indian dancer Indrani. Erdos has performed in India as well as at the Danny Kaye Playhouse and Carnegie Hall. Adriane was assistant director for several plays, including the Tony award winning play “Side Man”, by Warren Leight on Broadway.

Philip Hamilton is recognized as a leading contemporary composer of music for dance.  His music has been hailed as "powerful" and "explosive" by the New York Times.  Hamilton is the recipient of the New York Dance and Performance Award (Bessie) for his Body of Work in the field of Composition for Dance. He has composed for the world’s leading choreographers and dance companies, including the Alvin Ailey American Dance Theater, Judith Jamison, Ballet Austin, Ron Brown, Ballet Hispanico, Rennie Harris, Robert Battle, Dancing with the Star’s Mia Michaels, Complexions and Ann Reinking, the Tony award-winning choreographer of Chicago and Fosse. “Ezekiel’s Wheel”, Hamilton’s critically acclaimed work with choreographer Danny Buraczeski is hailed as “a modern masterwork” in the Minneapolis Star Tribune.

Corrado Verini is a well rounded dance/theatre production artist who is always in search of new challenges and new collaborations with artists. He has dedicated time to lighting the human body in his many forms and shapes,with traditional instruments, video projections and others media.Born and raised in Rome, Italy, Verini has collaborated and toured worldwide with a wide diversity of artists from Peter Sellars, Momix  and Moses Pendlenton to the Guggenheim Museum, massive land art projects, and Operettas.